[note: this story was sent to me back in 1998! Better late than never, but be aware of the date!]

After sailing and flying back to Finland, I finished my high school here, went to the University of Tampere where I got my Master's degree in Pol Sci (the subject of my thesis was the standing of the president in Austria, Ireland and Iceland - I still haven't been to Iceland, the others I have visited) and started working in the State Treasury of Finland. Incidently, I am working again after returning home from the world. I'm married - 25 years this September, can you beat that! - to the same man but have no kids.

We have spent a lot of time travelling, mostly all over Europe. Because of my husband's work we stayed two years in Southern Germany (with an easy access to Italy!) and two years in France, near Paris, and let me tell you those were the best two years of my life - yet. I suppose my favorite places in Europe - so far - are the Greek Islands, Ireland (the Republic part), Central Italy and of course France, but that's my second homecounty. I love to be able to speak a few different languages, especially the Latin based ones and would like to learn more. We are just leaving for Madrid, Spain for our Silver Wedding Anniversary and I look forward to speaking Spanish again.

I have been back once to the US, in 1983 when we flew first to Seattle and then came down the coast and redwoods with one of my American sisters, Jan Lawler. We stayed with the various of my sisters and Dad and I must confess that it was just like old times and I felt then as I have always felt that I was one of the luckiest foreign exchange students ever - I had such good fortune to have a wonderful family and friends in California.

My American Dad with his new wife (Sue's ed note: they've been married 20 years this March!) were in Finland this summer and we had a lovely time. All the girls have visited me in Finland except Sue but I haven't given up hope yet of getting her here as well.

I still have a lot of hopes and plans for the future, there just has to be something new and exciting coming our way!!!! 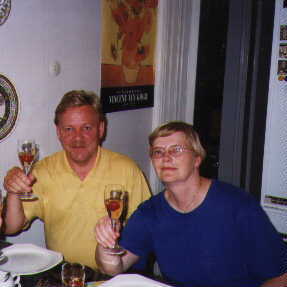 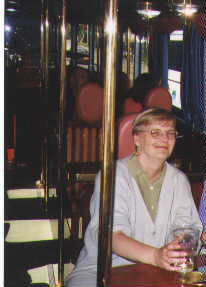 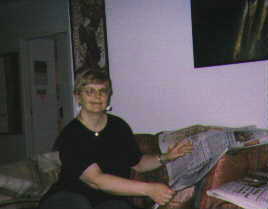